This free Ableton Live 10 audiorack from hardbeats.be emulates an enhanced stereodelay effect that was inspired by the legendary 2004 trance track ‘Motocycle – As the rush comes‘. Every synth that was used throughout the track, was processed through this effect, which gave the track its iconic vibe and atmosphere. Together with a mesmerizing vocal by Andain, the ingredients for a worldhit dance classic were found. Now, you can have this effect in your Ableton Live environment for free by downloading our free Ableton Rack below. No strings attached.

What does it do?

At its core, our Ableton Rack ‘Stereo Rushdelay’, is a dotted eigthnote stereo delay which gets modulated and filtered to create its unique sound. To create the ambient vibe out of these processed rhythmic elements, some reverb is added and the signal gets compressed. This results in a rich effect rack which is ideal for use on a return track. 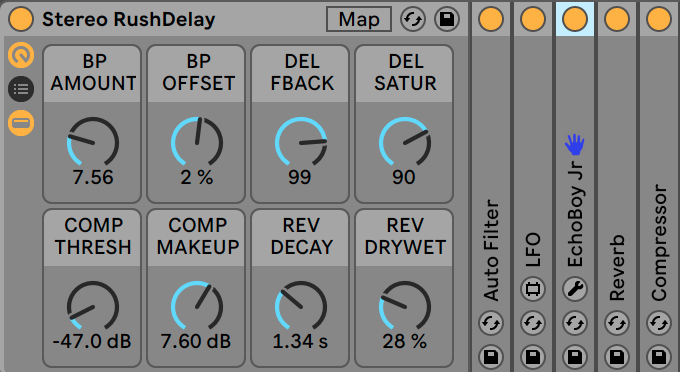 Using this plugin is really easy and happens in 3 stages. Before we begin, setup a new return track in Ableton and place the ‘Stereo Rushdelay’ rack on it. As a default, we have already set a nice position on the controls but for the purpose of this walkthrough, we will be resetting them to a more ‘clean default’ so you will have an opportunity to learn the controls going through each phase. To get the effect going, send about -12 to -9db from input channel to the return track to begin with.

Part I: The Delay

When you load in the effect rack, set the controls to a ‘clean default’ like on the image below. The first thing you will here is clean delay. It already has some shaping going giving the sound a nice stereo feel without overshadowing the mix.

Now it’s time to personalize the effect to our taste. First we are going to decide on the character of this synth. You can do this with the ‘DEL FBACK’ control. By giving the rack more feedback, you will hear more free-running delays which will boost certain frequencies. Set it to taste. We advise you to aim for a point where you find the clean signal and the delay are creating an A/B harmony.

Since both signals originate from the same sound, we are going to mix them better together by saturating the delay. Our general strategy here is to give quite a bit of saturation with ‘DEL SATUR’. Our aim here is to have the transient of both signals sound as one without distorting it to a point where crunches in the sound start to appear. The added bonus of this technique, is that the tail will start to pop out which will give a very stereo feel, while the attack of the sound will be feel very centered.

We have created a very filled soundscape by now. The stereo delay has given the sound a very nice and natural groove. Helping to this effect is the built in LFO we placed in this patch. By default it is designed to make an imperfect sine driven but balanced bandpass filter.

The ‘BP OFFSET’ control will favor certain frequency regions by giving them more unmodulated time in an 8 bar timing compared to the other half. Put in layman’s terms, if you turn the controller to the left, it will stay longer in the lower frequencies and if you turn it right, it does the exact same thing but then for the higher frequencies.

To intensify and diversify your sounds more, we advise to add a touch of ‘BP AMOUNT’ to deviate it a bit from the standard 1/8d rhythm. Use the ‘BP OFFSET’ to reduce the effect for to lower or higher frequency band if the mix requires it.

Before we can start compressing the effect, we need to listen to the return track in solo carefully. The delay effect is by default very soothing and gives the impression of having alot of reverb. But peaks or aggressive frequencies give away that it is in fact reverb free. If we don’t address these peaks, we cannot compress them later on in a clean way. To counter this, we use the ‘REV’ controls.

First we start by setting the ‘REV Decay’ to about 1 second and we turn the ‘REV DRYWET’ up slightly to hear its effect. Our goal with the reverb is to glue to sounds together so they are more balanced in volume. Too much reverb will kill the depth of your delay, so be sparse with it. Use low percentages and play with the decay control to get the sweetspot.

Turn off the soloing of the return track. You will hear that the balance we created earlier when saturating the delay, is no longer there. This we will fix by compressing the added effects back to the desired level. By dialing back the ‘COMP THRESH’ control until the sound sounds more ‘flat’, we glue the bandpass and reverb effect into the delay to create a coherent sound.

We love to drive the control to the max first and then returning back to 0 to find the sweetspot between a flat sound and dynamics. Afterwards, use the ‘COMP MAKEUP’ to get the sound to the requested level. You have achieved the sound when in the end result, the effect tail is filling the gaps between the notes at a high volume rather than a delay in the background.

To make use of our Ableton Rack, you need the Suite edition of Ableton Live 10. This rack has some dependencies to make note of.

To maximize compatibility, a version was made out of stock plugins to create the same effect.

Where can I get it?

The ‘hardbeats.be Ableton FX – Stereo Rushdelay’ can be downloaded from our webshop. It will be attached to your account so you can get it later at any time.